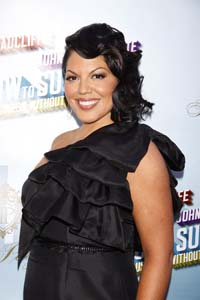 “Sara Ramirez and her longtime partner Ryan Debolt are thrilled to announce their engagement, which took place in Paris, France,” her spokesman confirmed.

The multi-talented entertainer’s engagement comes after a period of self-doubt regarding her weight.

“There’s a whole list of things you could worry about. Are you skinny enough? Are you too fat? Are you talented enough?” Ramirez said in a past interview. “In all kinds of ways, I used to be really, really hard on myself.”

Her best friend’s death in 2008 made her see that life is short.

“One of the things I’m clear about is how sexy I feel. I feel badass and sexy and empowered and clear.”

Well, we think she’s always been gorgeous, sexy and talented — especially since ABC gave her the option to star on any show she wanted after seeing her once in the Broadway show Spamalot. She chose Grey’s Anatomy because she was such a fan of the show.

Plus, she’s engaged now, so she has it all — lucky girl.

Who is your favorite character on Grey’s Anatomy?