Oprah Winfrey has been given an honorary doctorate degree from a university in South Africa known for its tense race relations. 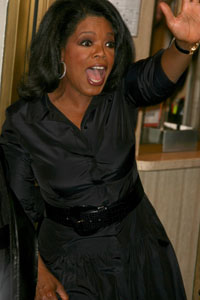 Just call her Dr. Oprah. Famed media icon Oprah Winfrey has been given an honorary doctorate degree from the University of the Free State in South Africa, where not so long ago race relations were tense at best.

In 2006, four white students made a video humiliating the school’s black cleaning women and opposing integration of the traditionally all-white school. Now, students say, a visit from Oprah shows how much race relations have improved at the school.

Oprah has her own school in South Africa, an all-girls primary academy that has not been immune to its own scandals. A dorm supervisor was accused of sexual abuse but was acquitted last year. Even still, her tireless work to make the lives of girls better in the country has counted for good.

“She did so because she believed that there was important work to be done here, and she wanted to be part of what Nelson Mandela and others had begun,” said the citation during her degree conferral.

While in South Africa, Oprah took some time to hang with her other, non-Gayle BFF Michelle Obama, who also happened to be in the area.