Michael Jackson feared he would be killed for his music catalog, according to his sister La Toya Jackson. 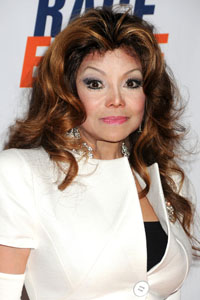 La Toya Jackson is busy talking about her dead brother Michael Jackson to shill her new book Starting Over, and today she’s saying the King of Pop was actively in fear of his life.

La Toya says MJ told her he knew his music catalog was his most valuable possession — and the only thing standing between it and other people getting very, very rich was his life.

“This is definitely something that was premeditated, that they had planned to do, and they planned to take my brother out, and my brother knew it, and that’s why my brother told me repeatedly, repeatedly and repeatedly, that this was going to happen to him,” La Toya said. “He explained to me, ‘It’s because of my catalog.'”

She also has harsh words for John Branca and the other executors of Jackson’s estate.

“They care about what they can do and what they can get their hands on, and no one in the family has anything to do with the estate,” she said. “At this point, blatantly said, John Branca right now is Michael Jackson.”

The estate has fired back with their own statement:

“After numerous hearings and after reviewing evidence contained in countless filings and exhibits, three California courts have decided John Branca and John McClain are the rightful and lawful executors of Michael Jackson’s Estate just as Michael specified in his will.”

“Mr. Branca and Mr. McClain have turned the estate around financially for the benefit of Michael’s children and mother, protected the intellectual property and music catalog assets Michael accumulated during his lifetime as well as carried out their mandate to shelter and preserve funds for his children until they reach certain ages as adults. Their performance as the executors of Michael’s estate is a matter of extensive public record and speaks for itself.”

La Toya famously turned against her brother by supporting claims that he was a child molester, then later reneged saying her abusive husband Jack Gordon made her say it for publicity.