Do you like to take old socks and turn them into puppets? Do you look at a craft store and drool the way other people drool over shoes? Are you a Star Wars fan? Well, of course you are! If you don’t have a copy of The Star Wars Craft Book, it’s time to march right out and get one! We were lucky enough to chat with author, blogger and geek girl Bonnie Burton about the book, daily blogging for StarWars.com and Wookies.

There are Star Wars crafts for every level, for both kids and adults. Plus, how can you resist the urge to make a Jabba the Hutt body pillow? I certainly couldn’t! 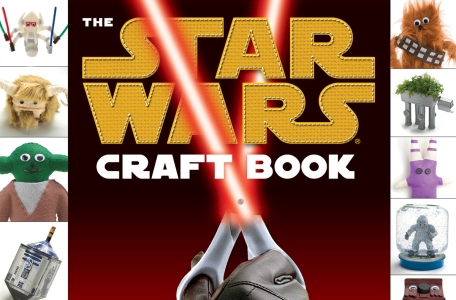 When Bonnie isn’t shrinking apple heads to make an Emperor Palpatine doll, she’s busy blogging on her site, Grrl.com, and keeping us entertained on Twitter. Follow this lady now! And check out her other books, You Can Draw: Star Wars
, Draw Star Wars: The Clone Wars
and Girls Against Girls: Why We are Mean to Each Other and How We Can Change.

SheKnows: Tell us how you got started writing.

Bonnie Burton: Writing has always been a fun outlet and compulsion for me. I remember writing short stories about mud monsters that promised to eat my vegetables when I was seven. In fact, there was a moment when I was a kid that I decided I wanted to be a journalist and I interviewed my toys! In third grade, my teacher told me I was a talented writer and that was the first time someone thought my writing was great, which just encouraged me even more. It’s amazing how one person can influence your entire life. So I have to thank all my teachers that took the time to encourage me, push me and help me as a writer.

SheKnows: How did you get involved at Lucasfilm?

Bonnie Burton: I answered a job listing in Craig’s List for a writer-editor position at StarWars.com. Honestly, I didn’t think I had enough geek cred for the job, but somehow I kept my cool during the interview process, let my writing speak for itself and the rest is history.

SheKnows: Where does this lifelong love affair with Star Wars come from?

Bonnie Burton: I grew up in a rural area of Kansas, so in a way I’ve always felt like I had a kinship to Luke Skywalker who was also a farm kid hoping for a more exciting life. When I first saw Star Wars it felt like a door swung open in my imagination where I could be best friends with a robot and a giant bear-like creature. Princess Leia is a lifelong role model for me — she’s sassy, brave, and doesn’t let the boys push her around. I wore my hair like Princess Leia every day at school for months! Star Wars will always be one of my favorite films because the story is epic and the characters are believable. I always lose myself in a good way. I never want the movie to end! 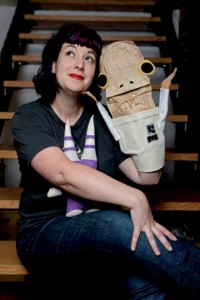 SheKnows: Talk about some of your earlier books, especially Girls Against Girls: Why We Are Mean to Each Other and How We Can Change. It’s particularly important these days…

Bonnie Burton: Sadly, girl-on-girl bullying never goes away. I was both a victim of mean girls and at times I could be a mean girl as well. I really wanted to write a self-help book for teens that didn’t speak down to them and had practical advice. Most mean girl advice books out there are for parents and teachers, or they don’t bother addressing how not to be a mean girl while defending yourself against them. We all have in us the potential to turn into a mean girl. It’s a constant uphill battle not to gossip about friends, or give people the silent treatment just because you’re angry.

SheKnows: Let’s get into The Star Wars Craft Book. How did you get into crafting? How did this come about?

Bonnie Burton: Crafting is in my blood! No really. If you cut me, I bleed glitter! At a very young age I remember cutting up magazines and making collages with good, old-fashioned Elmer’s craft glue and construction paper. I’d turn old socks into puppets. I’d put googly eyes on everything — I still do! My mom was a librarian and would bring home craft books and magazines that I would pour over and try to replicate everything in them. I would get a new craft kit every Christmas and birthday, so I was always making a latch-hook rug or using a loom to make a pot holder. I was the go-to girl for friendship bracelets, braided barrettes and tie-dye shirts. I looked forward to the craft in Sunday school more than the sermon, which explains why my Jesus portraits had the most glitter. (Take that Lady Gaga!) I never grew out of crafting and don’t think I ever will.

SheKnows: Give us a look at some of your favorite crafts. What skill levels are they for? Where did they come from?

Bonnie Burton: In my Star Wars Craft Book, I have a ton of really easy crafts for kids, beginners and the craft-phobic. I’ve tested out a lot of the kid crafts at Maker Faire and WonderCon and my kid craft demos which always go really well. So if you don’t want to sew anything, get out the craft glue and make a bounty hunter bean portrait, or paint R2-D2 on a rock, or make a Hoth snowglobe from a baby food jar, or create a duct tape AT-AT planter! I also included some advanced crafts for those fans who want a challenge! So if you know how to crochet there’s an R2-D2 beanie. If you like creature creation, there’s a multi-step Papier-mache Acklay! 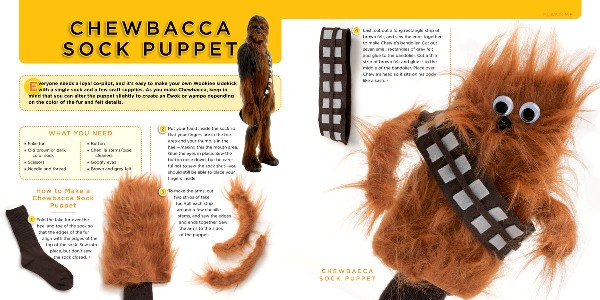 Bonnie Burton (continued): Aside from the R2-D2 Beanie, the Star Wars T-shirt Blanket and a few other crafts in the book, all of them came out of my geek brain. I’m always thinking of fun, new crafts to do with a Star Wars twist. I get inspired from galleries, county fairs, street art, museums, little kids, and even dreams. The more you craft, the more you see potential art projects in the simplest items — wooden spoons can become Bith band puppets, an empty jar turns into an Ewok vase, and a shriveled apple looks like Emperor Palpatine’s weathered, evil face. I love that craft ideas just pop into my head as I wander through a craft supplies store, or when I go for a dog walk. You never know when inspiration will hit!

SheKnows: You have some profiles of people who’ve done great Star Wars crafts. I especially like the Millennium Falcon bed. Do people submit these to the site? What is the weirdest Star Wars craft you’ve ever seen? The coolest?

Bonnie Burton: I follow a lot of crafty blogs, read craft forums, and tweet with a lot of craftsters, so I’m always keeping an eye out for fans that make some amazing crafts while celebrating their love for Star Wars. I started a Star Wars Crafts LiveJournal Blog to have a place where fans can post what they’re making and share ideas. A lot of crafty fans tweet me their craft projects too which is awesome! The Millennium Falcon Bed by Kayla Kromer is Star Wars crafting at its best. She made an amazing piece of art that’s also functional!

SheKnows: Talk about the work you’ve done on the kids section of StarWars.com. Is there anything new coming up that we should know about?

Bonnie Burton: When I started writing content for the kids section of StarWars.com, there was a lot of basic movie info, as well as reviews of books and comics for kids, and online games; but there wasn’t a section where kids could do things to express their love for Star Wars in a more old-school, creative way. As a kid, I loved to draw scenes from Star Wars. I also loved making geeky crafts of my favorite Star Wars characters. I wanted to bring those same kinds of activities back to StarWars.com. So I worked with artists who all had different artistic styles to do step-by-step instructions on how to draw Star Wars characters, and it was a huge hit with parents and kids, so much so that I ended up writing two Star Wars drawing books — You Can Draw: Star Wars and Drawing Star Wars: The Clone Wars.

SheKnows: I realize this is like asking you which child is your favorite, but do you have a favorite film?

Bonnie Burton: I think Star Wars: A New Hope will always be my favorite movie. It’s in my top five favorite films of all-time along with Blade Runner, Mothra vs. Godzilla, Ghostbusters and The Thin Man. Star Wars opened my imagination to a galaxy far, far away. It helped me believe that even a kid raised in rural conditions could end up doing great things and meeting amazing characters. Star Wars inspired me to visit some of the most exciting cities in the world, and make friends with a lot of uniquely interesting people… though I have yet to blow up a Death Star.