How did Lindsay Lohan get out of going to jail again, despite the fact she tested positive for alcohol while under house arrest? Read on to find out! 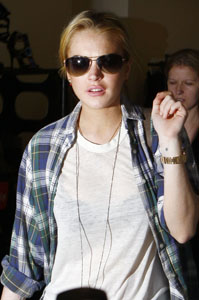 We really thought she did it this time. When Lindsay Lohan tested positive for alcohol after throwing a party while under house arrest, we were sure the judge would send her right to real, grown-up person jail.

Lucky Lindsay Lohan’s list of copouts wasn’t even needed this time — Lilo got off without so much as a slap on the wrist, all because her previous judge forgot one small detail. He never said she couldn’t drink under house arrest!

Judge Elden Fox presided over Lohan’s various shenanigans for a while, and the last time he put any kind of limit on what Lindsay could put into her body was from January 3 to February 25, when he wanted her tested for controlled substances only. Alcohol was never on the prohibited list.

This means that not only should Lindsay get a free pass for this, but that the probation department never should have been testing her for alcohol in the first place.

This new judge didn’t let her off without a few modifications to the house arrest rules, though.

“What you are guilty of is poor judgment to have parties on your roof,” Judge Sautner told Lohan. “You are not to have parties, you can have one friend over at a time, plus family members or business associates. You can go on your roof, if probation calls you, you must answer. There is no drug or alcohol testing in effect.”

Judge Sautner refused the DA’s request to make drug and alcohol testing a required part of the rest of her time under house arrest.

Shawn Holley, Lindsay’s lawyer, expressed her satisfaction at the judge’s decision. “Today the court made clear that Lindsay is in compliance with the terms of her probation, the terms of her electronic monitoring and the laws, rules and regulations of the state of California,” she said.

“The probation department’s finding that Lindsay was in violation of probation, as well as its position that she should be subjected to testing were plainly erroneous.”

Lindsay went on Twitter to express her Zen attitude about it all.

“Thank you to all of my fans for your support. Sending you Love and Light. xo”