Rihanna is being sued for ripping off a photographer’s creative vision in her video for S&M — for the second time. 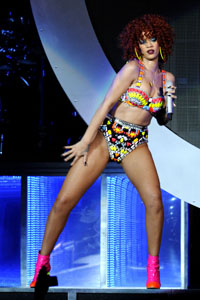 Back in February David LaChapelle sued Rihanna for ripping off his work in her racy video for the song S&M. Now a second photographer has stepped forward, alleging that Rihanna blatantly copied his photographs for the video too.

Famed fashion photographer Phillip Paulus claims Rihanna directly ripped off his fashion series Paperworld, which depicts a model in a formal gown trapped against a wall by plastic wrap, surrounded by X’s made of electrical tape. Rihanna has a nearly identical scene in the video.

“Why a worldwide celebrity is not able to afford a creative director, who creates individual concepts and stagings, is incomprehensible for me,” said Paulus. “To create new things within the creative cosmos, you can only expect this to come from a real genius, there is no doubt about that.”

“However, in this case there is no real genius who created their own work instead they stole ideas from a creative talent. Furthermore every other creative professional should realize how supremely embarrassing it is to copy the work of colleagues from the artistic world and then to be praised for it.”

When Rihanna was sued by LaChapelle, he claimed that a total of eight sequences in her video were copied from his own work. That suit is still pending.

read on for more rihanna

Rihanna in Cosmo, plus Man Down video!
Rihanna and Chris Brown reconnect on Twitter
Rihanna fights back against Man Down haters