When you’re famous what’s the quickest way to get the word out that you’re premiering a new music video? If you’re Selena Gomez — Facebook. Gomez released her new video for Love You Like a Love Song on Facebook and it’s pretty sick — in a good way!

Selena Gomez’s Facebook is probably blowing up right about now! She debuted her new music video for the song Love You Like a Love Song on her page and it is karaoke cool — not her singing, the actual video. 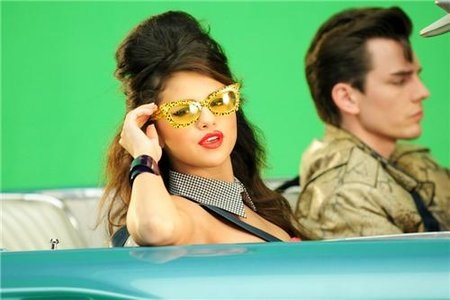 The video for Love You Like a Love Song is primarily set in a Japanese karaoke bar but also features Gomez rocking numerous costume changes like Marie Antoinette-inspired garb.

Selena Gomez hits the karaoke scene to sing Love You Like a Love Song and as she reads her own lyrics on the karaoke monitor, a different version of her takes over the screen. In one shot she’s on the beach, the next she’s letting her modern-day beehive hair blow in the wind as she rides in an old-time convertible.

There is something missing that you may or may not remember being a huge deal at one point — the painted horses. Remember when Pink made her point loud and clear about the painted horses that were in the original concept of the video? Yeah, they’re gone.

We do have to point one thing out that we think she might have snuck in. Watch closely and you’ll see Selena Gomez pop up on the karaoke monitor with super-short hair and sunglasses that remind us of someone familiar — Justin Bieber.

Check it out and tell us what you think. Love You Like a Love Song will be on her new album, When the Sun Goes Down, which hits the scene on June 28.