Family and friends, including Johnny Knoxville and Bam Margera, attended a private memorial service on Wednesday to mourn the loss of their friend and Jackass co-star, Ryan Dunn. 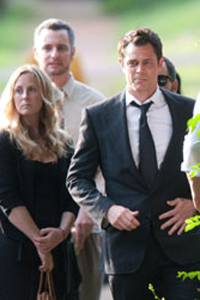 A private memorial service for Ryan Dunn was held at a funeral home in West Chester, Pennsylvania. Jackass co-stars Johnny Knoxville and Bam Margera were among the friends and family that came to say an emotional goodbye to their friend.

Dunn, 34, and his passenger Zachary Hartwell died on Monday morning when his Porsche (which was going around 130 mph) ran into a guardrail and burst into flames. Dunn was drunk, having a blood alcohol level over twice the legal limit.

Knoxville arrived at Dunn’s memorial with his wife. He was wearing a coat and tie and was emotional as he mourned the loss of his friend. “Today I lost my brother Ryan Dunn,” Knoxville tweeted. “My heart goes out to his family and his beloved Angie. RIP Ryan, I love you buddy.”

Bam Margera, who was recently spotted breaking down in tears at the crash site, arrived at the memorial with his wife, Missy. Bam’s parents Phil and April, who said Dunn was like a son to them, also attended the memorial.

It was a sad day for friends and family of Ryan Dunn.