It has taken 15 years for a decision to be made, however, the Supreme Court today ruled that Anna Nicole Smith’s estate gets not one single penny of J. Howard Marshall’s $1.6 billion fortune.

Anna Nicole Smith was a 25-year-old stripper that went by her original name of Vickie Lynn Hogan when she met 85-year-old billionaire J. Howard Marshall in 1991. Much to the dismay of his family, they were married in 1994 and she soon after shot to fame as a Guess and Playboy model. 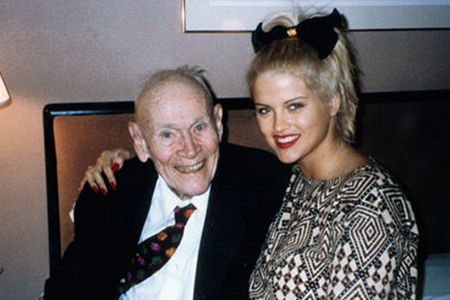 Marshall died 14 months later, and Anna Nicole was furious to find she had been completely left out of his will. She then sued for half of his trust and was awarded $474 million before it went back to the courts in a number of appeals.

Smith continued to drag the case through the courts, until Anna Nicole died in 2007, bankrupt, from a drug overdose.

Today, the U.S. Supreme Court ruled that the bankruptcy court that awarded Anna Nicole $474 million (which was later reduced to $89 million) did not have the authority to do so — and therefore Anna Nicole’s estate gets no money at all. Zip. Nada.

Since Anna Nicole is dead, this means her sole heir, daughter Dannielynn, gets no money from this 15-year-old case. Four-year-old Dannielynn is being raised by her father, Larry Birkhead. Last year he auctioned off some of Anna Nicole Smith’s things, including a 1992 Mercedes-Benz 300SL roadster and a dog bed, for money to raise his daughter.

“It’s like, do I want to hold on to one of Anna’s dresses, or do I want to try to help Dannielynn’s future?” Birkhead told Reuters. “We have money. We have more than enough to survive on. [Auction proceeds] would just supplement that.”