A Los Angeles judge found that troubled starlet Lindsay Lohan did not violate the terms of her probation by indulging in alcohol during her house arrest. However, she was chided by the court for exercising poor judgment during a critical time in her healing and parole. 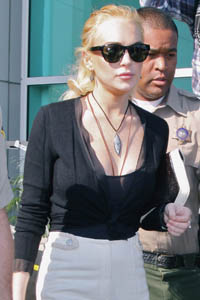 Superior Court Judge Stephanie Sautner declared during a tense appearance in court for starlet Lindsay Lohan that she did not violate the terms of her probation. The judge also told Lohan that, “If you are guilty of some violation of your probation, I don’t see it. What you are guilty of is extremely poor judgment.”

It was found that she did not violate any terms of her probation agreement because the testing requirement, imposed by another judge, ended in February.

Upon hearing the judgment, Lohan tearfully hugged her attorney Shawn Holley. Holley stated outside the court that Lohan has been abiding by the terms of her sentence and that “alcohol is not illegal.”

This particular part of Lohan’s sad saga came to light after paparazzi took photos of her hosting several house parties during her house arrest in the Venice neighborhood of Los Angeles.

Lohan was ordered to appear in court on July 21st and would not incur any additional penalties if she abided by the terms of her probation. Lindsay is nearing the end of her 35-day house arrest on a four-month jail sentence. She has been to court five times since she was first arrested in 2007 and has been sent to jail four times, all her sentences shortened due to prison overcrowding.

Lindsay Lohan has made more headlines due to poor personal choices than career choices. She was recently in the headlines as a crazed fan named David Cocordan threatened to sexually assault the actress. On Wednesday, Lohan stood up television reporter Matt Lauer, who had flown to California to personally interview the actress during her house arrest. According to the Washington Post, conflicting reports state that Lohan cancelled at the last minute due to either the failed drug test (how can you tell someone you’re trying to change your life around with that secret about to be revealed?) or the fact that Lauer would have sat her down to talk for more than the 15 minutes she was told the interview would take, so he could feature it on both NBC’s Today show and Dateline.