Pink lashes out in an angry tirade against paparazzi she says won’t leave her, her husband, or her newborn baby alone. 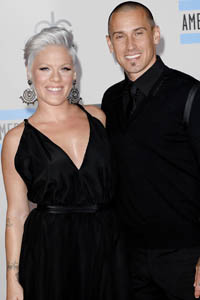 Pop star and new mom Pink is putting her foot down when it comes to the paparazzi taking photographs of her family and new baby Willow Sage. In a lengthy rant on her site, Pink, whose real name is Alecia Moore, says she’s had enough of photographers and videographers making her family’s life a nightmare.

While Pink and husband Carey Hart did release a photo of themselves posing with their new baby tucked in Pink’s arm, she says that was to fend off the paparazzi’s relentless attempts to photograph her daughter, and all proceeds from the sale of the photograph are going to charity.

“In the face of camera lenses as long as my arm and flashbulbs as bright as the sun, Willow is powerless,” the post reads. “All she has to protect her is us. But that’s not all she has; she has you.” If a photo is taken without their permission, says Pink, you may see her middle finger in it.

What do you think of Pink’s plea? Are celebrity babies fair game?