Reggie Bush must not be over Kim Kardashian yet, because his new girlfriend is Kim’s look-alike — literally! 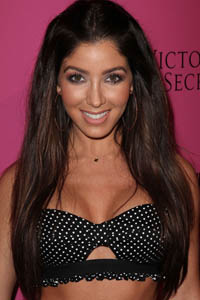 Poor Reggie Bush must be miserable without Kim Kardashian, and to make himself feel better it seems he’s hooked up with a woman who looks exactly like his ex-girlfriend. In fact, Reggie’s new arm candy, Melissa Molinaro, looks so much like Kim that she played the sexy Kardashian in an Old Navy commercial.

Now that Kim is engaged to Kris Humphries, Bush must have decided to get a piece of his own, and he found his perfect woman in Molinaro, an actress and model. If you recognize Molinaro, that may be because she appeared on Making the Band 3, where she failed to score a spot as a member of Danity Kane.

But she’s most famous for appearing in an Old Navy commercial in which she played the part of a Kim Kardashian wannabe. Clearly, the similarities are working for her.

“To me it’s extremely flattering,” Molinaro said of the Kardashian comparison. “She is a beautiful woman… That’s an amazing compliment.” She was so flattered, she figured she’d get Kim’s ex out of it, too.

What does Kim think of her twin replacement?

“Kim knows about her and doesn’t care,” a source claims. Judging by the tension between Kim and Reggie on recent episodes of Keeping Up with the Kardashians, we wouldn’t be surprised if Kim is more peeved than she’s saying.