Courtney Love was burned in a house fire. What happened? Love isn’t saying. 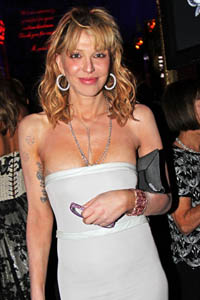 Courtney Love can’t stay out of harm’s way for long, and this time it’s because there was a fire at the massively expensive New York City townhome in which she lives.

Firefighters showed up at Love’s West Village crib in the wee morning hours today, where, they discovered, the drapes in the rock star’s place had caught fire.

“We can confirm that we attended a small fire at the location and the curtains were on fire,” New York fire officials said of the incident, which happened in the $27,000 a month apartment she has been leasing since February. “The owner had burns to her hands and refused medical treatment.”

How severe Love’s injuries are and why she refused medical care remain unanswered questions for the time being. As far as the fire, no word yet on how extensive the damage was to the three-bedroom, six-bathroom abode described in its rental listing as “made for luxury living and entertaining.”

In the past, Love likely would have taken to Twitter to give her version of whatever went down in what she was lucky didn’t become an inferno, but it appears Love is no longer on Twitter. Two Twitter accounts affiliated with her are no longer active. One has been removed. The other has been suspended.