You’re not going to believe what happened to Justin Bieber outside a New York City Macy’s. 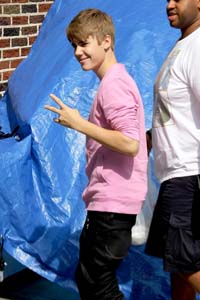 Rest easy, Selena Gomez: Beliebers have a new death threat target. A man hopped a barricade outside Macy’s in New York City’s Herald Square and knocked Justin Bieber to the ground. The Biebs is making the rounds in NYC today to promote his new perfume for girls, Someday.

“Gonna chill… grab a bite… then see everyone at MACY’s for the #SOMEDAY launch. LEGGO!!” Bieber tweeted before the event.

While there, he decided to go outside to greet fans that couldn’t get into the store for his appearance — and that’s when an adult man scaled a barricade and knocked Bieber to the ground, according to WABC.

Bieber wasn’t hurt in the incident, but he was “visibly shaken” and tried to fight back against the assailant. The man was quickly grabbed by cops and hauled away.

Why would a guy push poor, precious Biebs to the ground? He’s either a serious Belieber or a guy who was jilted by his girl over Bieber. All joking aside, we’re glad he’s okay. Incidents like this make it more difficult for stars to reach their fans on a one-to-one level.

Some guys in a building across the street caught the fracas on tape — and they added their own lame (and NSFW) commentary too.

Fans had lined up outside Macy’s since the event was announced on Tuesday. He’s stirred up pandemonium all over the city today with appearances on the Today Show and The View.

“The ladies of @theviewtv thank you for having me. awesome as always… sorry for the prank. lol. #someday,” Bieber tweeted.