Seven years and one hit movie later, the Winklevoss twins are over fighting with Facebook’s Mark Zuckerberg. See what made the Ivy League pair finally accept their $65 million.

The Winklevoss twins have given up hopes to get their rowing mitts on any more of Mark Zuckerberg’s Facebook cash. TMZ reports Cameron and Tyler Winklevoss, boosted to fame in The Social Network, have put an end to their seven-year legal battle. 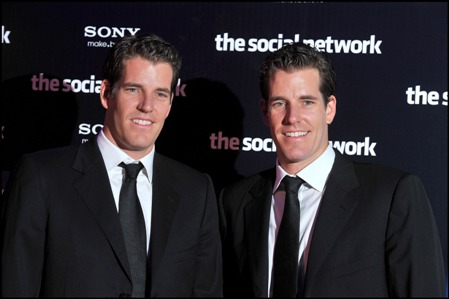 The original case, in which the Winklevoss twins alleged Mark Zuckerberg stole their idea for a social network, ended with Tyler and Cameron being awarded $65 million in Facebook stock.

Things would have ended there, but the boys contended that Mark kept documents secret during the trial, causing the amount they were awarded in 2008 to be unduly low. In order to reopen the case, the Winklevoss twins would need a judge to invalidate the original settlement so they can renew their fight for more money.

After numerous legal setbacks the pair have finally thrown in the towel.

Now before anyone breaks out a tiny violin and sends condolences to the Winklevoss twins, take solace in knowing the $65 million in stock they won in the original case has already grown to $100 million.

How would you have ruled in the Facebook Winklevoss twins’ case?