Poor Betty Draper has spent a good part of her Mad Men life pregnant. Will January Jones’ pregnancy in real life mean Betty is back to sipping martinis in maternity clothes? 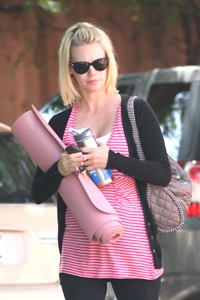 Season five of the hit show Mad Men has a few bumps to deal with in the storyline — the fictional baby of Christina Hendricks‘ character Joan, and the real-life pregnancy of January Jones!

While the mystery of who is January Jones’ baby daddy continues on, Mad Men executive producer Matthew Weiner has shed a bit of light on if her real-life pregnancy will influence the show. Lucky for Betty Draper, the writers have decided against saddling her with baby number four.

So, how will the show work with the ever-growing bump of January Jones, who is due during the middle of scheduled shooting? Matthew Weiner told E! Online, “I have to do something about it, but I’m not going to tell. It could be laundry baskets or it could be a body double. There are a million things you can do.”

With the fifth season of Mad Men not debuting until 2012, Matthew Weiner also has a bit of time on his hands should re-shoots be needed after January Jones’ baby arrives.

Despite all the speculation over January Jones’ baby daddy, Matthew Weiner says motherhood has been in the actress’ dreams for years. “She has wanted this very badly,” he said. “She’s got a big heart and she’s been talking about having children since I met her, which is not always common with actresses.”

Would you have liked to have seen Mad Men’s Betty Draper follow in January Jones’ pregnancy footsteps?