The very, very long and twisted road to the production of The Hobbit has finally led to the beginning of production. And thank goodness! Entertainment Weekly has just posted the first official photos from the set to mollify fans and we’ve got them for you.

I’ve never been happier to write a story. The Hobbit is one of the beloved books of my childhood, just as it has been for generations of fans. After the success of The Lord of the Rings trilogy, people hoped this film wouldn’t be too long in the making. Problem after problem plagued the production, from money woes to location issues to casting to the loss of Guillermo del Toro as director. But finally, production has begun. Director Peter Jackson has released the first three official photos from the set and they look fantastic! 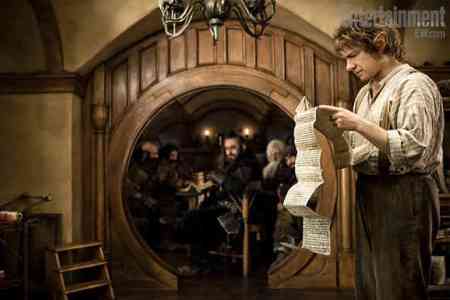 First, we have Martin Freeman as Bilbo in his home. Now, be honest. You just teared up a little, didn’t you? Yeah, me too. Jackson had this to say about Freeman, ”He fits the ears, and he’s got some very nice feet. I think he’s got the biggest hobbit feet we’ve had so far. They’re a little bit hard to walk in, but he’s managed to figure out the perfect hobbit gait.” Hobbit feet! 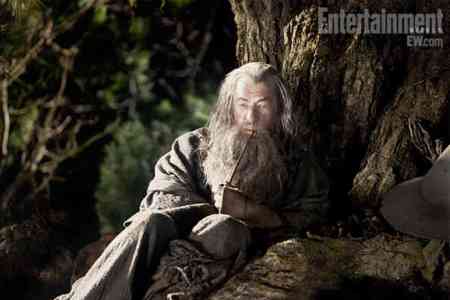 Second, we have Ian McKellen as Gandalf, the iconic character from both LOTR and The Hobbit. Jackson said, ”He’s in fantastic form. In a way, his role in The Hobbit has more technical difficulties than Lord of the Rings did, because he has scenes with 14 smaller characters — obviously the dwarves and the hobbit are shorter… I remember saying to him [laughs], ‘Look, this isn’t Waiting for Godot or King Lear. This is The Hobbit. This is the real thing.'” There was talk of McKellen leaving because of production delays a while back, but to me, there is no one else in the world who could play the role. No one.

Finally, a shot of Peter Jackson and Martin Freeman in Bilbo’s home. ”There’s no way you can pace yourself for shoots like these,” Jackson says. ”When we were going through the schedule for The Hobbit, I felt a terrible drop in my stomach when I saw that we’d be shooting for 254 days. We’re only 12 days short of The Lord of the Rings even though we’re only doing two movies. When I saw that, I had to sort of pick myself up off the floor and carry on.” That is an insanely long production schedule, but so very worth it. 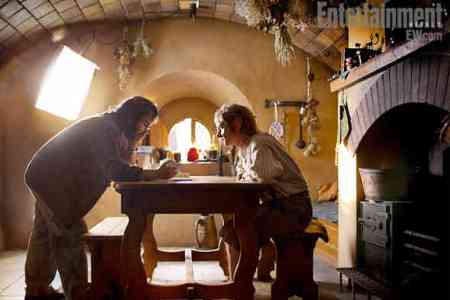 So, tell us what you think of the photos. Are you as excited as I am to return to Middle Earth? Let us know below. We’ll see the first of the two Hobbit films on December 14th, 2012. Best holiday present ever.