Justin Bieber stopped by The Late Show with David Letterman to deliver the night’s infamous top 10 list. What did Bieber have to say? 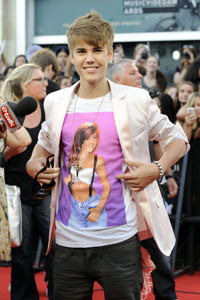 Whatever you think of Justin Bieber, let it never be said the kid doesn’t have a sense of humor. The teen idol poked fun at himself last night while delivering the Late Show Top 10 on David Letterman, and looked like he was having a great time doing it.

So what did Bieber have to say? The Top 10 Little-Known Facts About Justin Bieber:

9. I served eight months in prison for siphoning gas.

8. The first thing I bought when I hit it big was a four-slice toaster.

4. I begged my publicist to get me out of this.

3. Last week I accidentally waited in line for two hours for my own autograph.

2. My mom had to remind me that (Letterman is) not Larry King and…

Watch the video here on SheKnows!