Taylor Lautner takes his career very seriously. He doesn’t want to be Jacob Black forever so he’s doing everything he can to break the Twilight mold. And what better way to do that than headline an action flick directed by John Singleton called Abduction?

Related story Wait, were John Stamos and Ashley Benson ever really a thing? 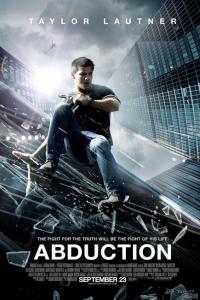 The Taylor Lautner-starring Abduction centers on a teenager who finds out that his whole life has been a lie. His parents are imposters, a group of rogue agents are trying to capture him and the only person he can trust is his girlfriend Karen (Lily Collins).

That’s enough drama to drive anyone to the edge, which could explain his pose in the poster. It looks like he’s jumping out of a window and sliding down a building to escape. The shot also appears in the Abduction trailer and it lets us know that Lautner means business!

Abduction also stars Sigourney Weaver, Alfred Molina, Maria Bello and Jason Isaacs. Some top-tier talent surrounds Lautner, which means he has to bring his A-game to this role. These guys aren’t the Cullens, they’re Oscar-nominated actors. The pressure is on!

Abduction opens in theaters on September 23.