Sean Kingston has been released from the hospital after a horrifying jet ski accident left him in critical condition. 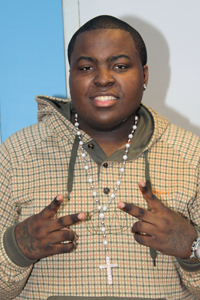 Witnesses described a horrific scene when Sean Kingston crashed his jet ski into a bridge near his Miami Beach home last month, but now the R&B star is well on the mend and has been released from the hospital.

The Beautiful Girls singer was in critical condition following the crash and suffered a broken jaw and wrist.

Earlier this week Kingston tweeted to his fans, “Feeling a lot better! GOD IS GREAT! Thanks for all the prayers and support! Love you ALL!”

Kingston’s passenger Cassandra Sanchez was not seriously injured in the accident, and despite the fact that Kingston behaved recklessly by speeding on the personal watercraft — which witnesses say caused the crash — she won’t be pressing charges.

“I know this whole thing was just an accident,” she said. “I won’t be pressing any type of charges or hiring a lawyer. Sean is a good guy.”

Kingston left the hospital with his mom on Tuesday and is expected to make a full recovery.