A stagehand died tragically before a performance of Broadway’s How to Succeed in Business Without Really Trying. What happened?

We know Daniel Radcliffe is a good actor, but did you know he actually gives killer performances? Okay, that was a really bad joke, but a stagehand that worked at Radcliffe’s Broadway show How to Succeed in Business Without Really Trying did die backstage before the 100th show, prompting a last-minute cancelation. 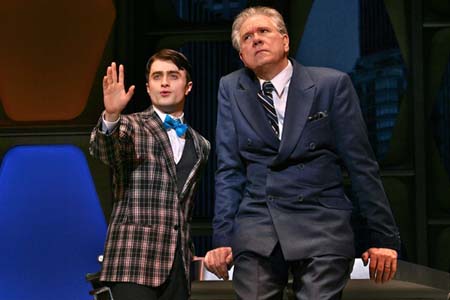 “It was a stagehand who had done something terrible to himself,” a theater industry executive told the New York Times. “Apparently it happened in a bathroom backstage, and it was very, very serious.”

The 29-year-old stagehand apparently went into cardiac arrest and later died at a New York City hospital, according to the Times. His death was reportedly prompted by a drug overdose.

Ultimately, show officials decided to cancel the performance — and Radcliffe and co-star John Larroquette went on stage to tell the audience.

“They said they debated it for a long time, and that there was a tragedy and they didn’t feel comfortable performing,” one audience member said.

“The two of them said they had mulled it over whether to go on with the show,” she said. “They apologized to everyone, but said it wouldn’t be fair to us because they would not have been able to give a good performance.”

Radcliffe and Larroquette stopped short of telling the audience what happened, saying it was “personal.”

Of course, audience members will get a full refund. We also think random drug tests are coming for all Broadway tech staff.