Tow Mater, Lightning McQueen and the gang are back in the brand new Pixar film Cars 2. SheKnows caught up with the cast for a video interview.

In Cars 2, when Lightning gets an invitation to compete in the World Grand Prix, he declines, saying he’d rather spend time with his friends. After Mater starts a rivalry between Lightning and Italian racer Francesco Bernoulli, the race is on. 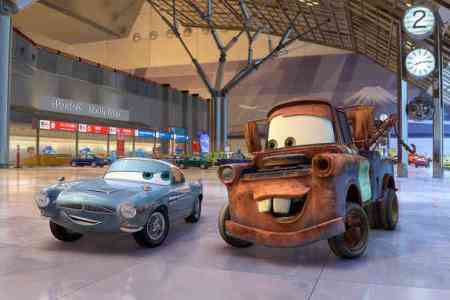 Lightning, Mater and friends fly off on a world tour to compete against the best. When Mater is mistaken for an American CIA agent in deep cover by British intelligence, he gets caught up in a fight to save his best friend’s life.

We were lucky enough to chat with some of the cast members including Owen Wilson, who voices Lightning McQueen, Eddie Izzard, who plays Sir Miles Axelrod, Larry the Cable Guy (Mater) and Emily Mortimer (British agent Holley Shiftwell), plus director John Lasseter.

They give us the scoop on what it means to be back in Cars 2, the message of friendship and whether or not they’d be back for a sequel. Lasseter even gives us a sneak peek at a future Pixar film, Brave, starring Boardwalk Empire‘s Kelly Macdonald, the first Pixar fairy tale and their first film with a female lead.