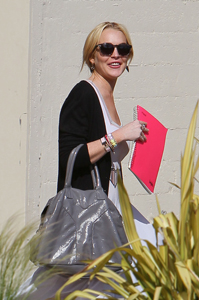 Think Lindsay Lohan is having herself a good ol’ time while under house arrest? You may be more right than you think.

Sources say that Lindsay Lohan failed an alcohol test right after she threw a rooftop party for her pals. The party itself is not against the rules — Lindsay is allowed visitors — but drinking definitely is forbidden.

In fact, Judge Elden Fox expressly forbade the star to drink or do drugs during her incarceration.

This turn of events is contrary to what she herself said when Lindsay talked about her house arrest.

“When my friends come over, they’re not drinking,” she said. “Alcohol is not in my house, so it’s just not a part of my life.”

Is “on her roof” considered “in her house?” If not, then I suppose she wasn’t lying when she said that.

Either way, we hear she’ll be heading to court on Thursday — and possibly will be in county jail by the end of business. Can’t wait to hear her excuse for this one.