Cee Lo Green is an entertaining man and if you’ve been watching him on The Voice you know he’s given a few crowd-pleasing performances. This week, he hit the stage with Bright Lights, Bigger City and brought along a fantastic wig and a few flappers with him.

This week, The Voice revealed the final four singers that will represent their coaches in the finals. But that’s not all that went down. Coach Cee Lo Green hit The Voice’s stage with a special performance of his hit single Bright Lights, Bigger City. 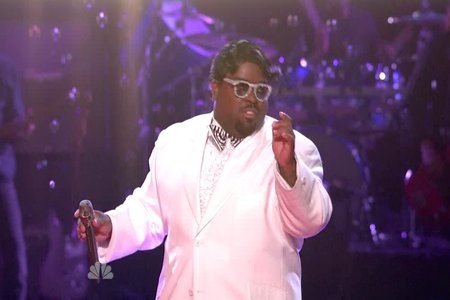 Cee Lo Green sure knows how to put on a show. Green treated viewers of The Voice to a stage show of Bright Lights, Bigger City that included dancers dressed as flappers and fun moves from the coolest man in music we’ve seen in a while.

One thing that we definitely have to note is Cee Lo Green’s ensemble. His stark white period-esque suit and slick wig were so Cee Lo Green that while we wanted to laugh, we totally realized it wouldn’t have worked without them.

This wasn’t the first time we’ve seen Cee Lo Green wig out. During last week’s episode of The Voice, he performed with his then team of four that ironically all dressed in ’60s garb while donning wigs.

Check out this week’s performance of Cee Lo Green rocking out to Bright Lights, Bigger City on The Voice.