Grey’s Anatomy, Cougar Town and Felicity cutie Scott Foley is getting into the True Blood drama. Will we finally see this good boy go bad? Maybe not, but “tough and rugged” sounds like a nice change of pace! 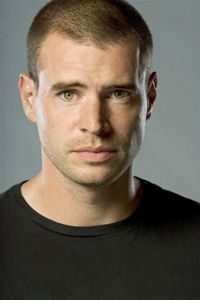 Scott Foley is making the move to Bon Temps, but with True Blood premiering this Sunday, he won’t actually get into the vamping, witchery and fairy mayhem until the end of the season.

Word from TV Line is that Foley has been tapped to play a pivotal recurring role that starts late in season four, but really takes off in season five, assuming there is one — and that seems a pretty safe assumption, yes?

Foley is known for playing the cute, good guys next door. This time, however, he’ll be playing “Patrick, a tough and ruggedly attractive old army buddy of Terry’s (Todd Lowe) who pays him a visit.”

Merlotte’s awkward but adorable chef Terry is a Gulf War vet who has been crawling slowly out of the clutches of post-traumatic stress disorder and into the arms of Arlene (Carrie Preston). He’s still tortured by what he did and saw in Fallujah, which we know includes killing 20 Iraqis, but who knows what other sins and secrets Terry is carrying? Foley’s Patrick might, and that could mean trouble.

Then again, Foley is also famous for getting into onscreen love triangles. Felicity fans are still split on the Noel vs. Ben riddle, while the Grey’s Anatomy finale put Foley up against Men in Trees alum James Tucker. For those who missed it, last season on Grey’s, Foley charmed Doc Teddy (Kim Raver) into a marriage of convenience and their faux marriage soon became complicated by real feelings. Then Foley landed his own pilot, along with Christine Lahti…

Prospects didn’t look good for Teddy and Henry, but it’s not clear whether Foley will check back into Seattle Grace when Grey’s returns this fall. CBS didn’t pick up his pilot, The Doctor, and according to TV Line, there are no scheduling conflicts with True Blood‘s shooting schedule.

Before Foley heads back to Seattle, however, it’s off to the sweltering heat of Bon Temps. True Blood premieres Sunday, June 26 at 9 p.m. on HBO. Have you seen the sneak peek of the first eight minutes of the True Blood premiere?!