Shrek’s sidekick Puss in Boots is back in his own solo adventure called — Puss in Boots! We think the title is very straight to the point and tells us everything we need to know. Antonio Banderas reprises his role as the furry feline in this new animated adventure. 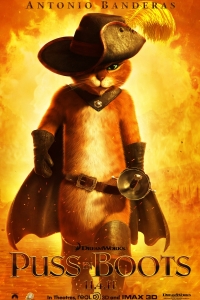 Whenever Antonio Banderas appears as a vigilante-type you know Salma Hayek is never too far behind. The actress who previously starred opposite him in Desperado and Once Upon a Time in Mexico voices Puss in Boots’ new partner Kitty Softpaws. She’s an expert thief who constantly puts the cat in his place in Puss in Boots.

The Hangover’s Zach Galifianakis also joins the cast as the neurotic Humpty Alexander Dumpty. We’re starting to notice that he has a thing for playing the socially awkward. In the trailer, his character, who has a fear of going to jail, exclaims, “Do you got any idea what they do to eggs in prison? I’ll tell you this, it ain’t over easy.”

Poor Humpty! He reminds us so much of the Gingerbread Man in Shrek. They’re both nervous wrecks 90-percent of the time they’re on screen. The rest of the cast of Puss in Boots includes Billy Bob Thornton, Constance Marie and Amy Sedaris. The film opens in theaters everywhere in 3D on November 4.