UK-born actress Lucy Punch has been on a roll of late and she is currently going toe-to-toe in the comic mayhem of Bad Teacher opposite Cameron Diaz.

Lucy Punch did the same in 2010’s Dinner for Schmucks with Steve Carell and Paul Rudd and also last summer appeared in the Woody Allen film You Will Meet a Tall Dark Stranger, achieving a lifelong dream. 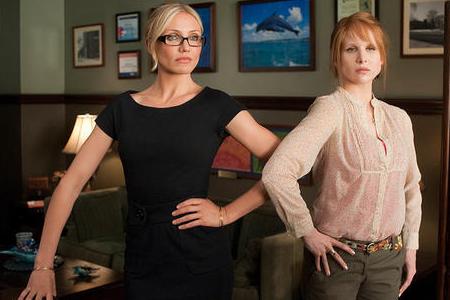 But it is her turn in Bad Teacher, also starring Justin Timberlake and Jason Segel, which should forever endear her to the hearts of American audiences. Her “bad” teacher is slightly off her rocker and makes every effort to stymie the antics of her fellow Bad Teacher, Cameron Diaz.

Punch greeted us with the most delightful of English accents in Los Angeles recently and proceeded to take us inside the world of Bad Teacher, as well as how an actress from the UK landed in Hollywood and is slowly, but surely, taking over.

Getting loopy with Lucy

SheKnows: People in America say you either like British humor, or you don’t. Is there that kind of a thing in England or the UK when you get American humor or not? Is there a difference?

Lucy Punch: I feel like British humor is darker. It’s more ironic. I think it’s because actually British people love our comic characters to be miserably awful. Then you’ve got to compare the British Office and American Office, you know. It’s very interesting that Steve Carell is humble and sweet and Ricky Gervais isn’t. It’s also their world is much more depressing. Definitely there’s an appreciation for British humor for me. I grew up watching TV shows and watching all those movies.

SheKnows: What does it mean to you being a UK actress to be so embraced here in America, especially in an American comedy?

Lucy Punch: It’s been wonderful and it’s kind of unusual. I’m shocked I came across and have done so well. There are a few of us that have, but it’s the hardest thing to infiltrate that world. I don’t know why but it is. I feel very lucky. Perhaps that’s the reason I moved from London to Los Angeles, because there are more opportunities here. But also I’m not getting typecast. I can do and play anything. I love that. 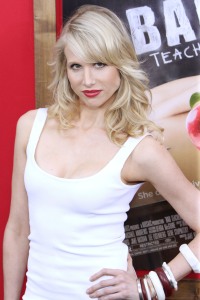 SheKnows: What was it about Bad Teacher that you liked? What stood out?

Lucy Punch: I was just surprised that it was very female-heavy. I think once they cast Justin and Jason it became an ensemble. But at the time when I first read it, it was just Cameron and me and Phillip. It’s still a pretty well-defined script and very female-driven. I was really impressed by that. All the characters were all defined and funny in their different way. I loved it.

SheKnows: What I like most about your character is when we first see you and meet you it almost seems like you are so welcoming to Cameron’s character and could almost be a friend of hers. Very quickly it goes off in a separate direction. Was that a delight for you to play that character and really be a blank slate? When we meet Cameron’s character it’s, oh my God, she’s really a bad teacher. With you, we’re not so sure.

Lucy Punch: Yeah, you think she’s going to be a good one. I actually believe that the demise of our characters’ relationship on screen would show more themes when you saw it slowly breaking down. You’re unable to hold the smiles. It’s hysterical to watch my character unravel. Yeah, it’s great — especially when we’re getting nastier and nastier to each other. To see teachers getting crazier, more and more bonkers, and more unhinged is truly funny.

SheKnows: What was the most enjoyable part of playing Amy, your character?

Lucy Punch: I loved that she was unhinged, slightly crazy. I loved the physical comedy and working out how she’d move and sit and the personality she has. I loved the scene at the end when she lost it, when she’s unleashed! That’s the best [laughs].