Jackass star Bam Margera visited the site of his friend Ryan Dunn’s death. What did he have to say?

Bam Margera made a tearful — and heartbreaking — visit to the site where his best friend Ryan Dunn died just hours before police revealed that the Jackass star was drunk when he crashed. 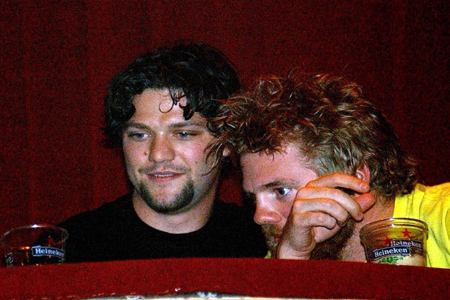 “I’ve never lost anyone that I care about,” Margera cried. “He was my best friend.”

Margera remembered that he had a weird feeling right around the time Dunn’s crash happened.

“I was in Arizona when I heard. I was with friends having the best time ever and at 12:30 I just started punching out the windows of the rental van… I don’t even know why… it was exactly when he crashed,” Margera said through tears.

It’s hard not to feel for the guy — he just lost one of his best friends and had to endure criticism from people like Roger Ebert blasting Dunn just hours after he died.

“He was the happiest person ever. The smartest guy — he had so much talent and so many things going for him. It’s just not right,” Margera added.

Margera is just one of many celebrities to speak out about Dunn’s tragic death, though he was probably the person closest to the stuntman.

“We are devastated by the tragic loss of Ryan Dunn — a beloved member of the MTV family for more than a decade. He made us all laugh and had the tireless enthusiastic approach to life of your favorite middle school friend. Our thoughts and deepest condolences are with Ryan’s family and friends. The Jackass brotherhood will never be the same,” MTV also said in a statement.

Hopefully young Jackass fans will see the heartache Dunn’s friends and family are going through and not drink and drive — that’s about the best thing that can come out of this tragic accident.

Read on for more Ryan Dunn