This month’s Men’s Health cover boy is everyone’s favorite summer vamp, Stephen Moyer. The man behind Bill Compton opens up about getting in shape for the new season of True Blood and falling for wife and co-star Anna Paquin (Sookie). 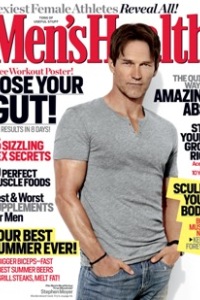 Stephen Moyer gets his workout on in the upcoming issue of Men’s Health and also reveals he was a goner after his True Blood screen test with the mysterious Anna Paquin.

“I was intrigued by her,” he says in the July/August 2011 issue. “She was very open about work, but she was withdrawn [personally]. I was like, ‘Here I am, here’s everything I got.’ I remember leaving the screen test and thinking, ‘God, I’d like to spend more time with her.'”

By the end of the pilot shoot, he was hooked and from the sound of it, so was Paquin. “I remember getting back to London and just going, ‘I have to keep speaking to this person,'” he recalls. “We began speaking every night on Skype for two or three hours.”

Those video chat sessions paid off. With the fourth season of True Blood set to premiere this Sunday, Bill and Sookie are on the outs, but their portrayers are a year into their happily ever after as man and wife. 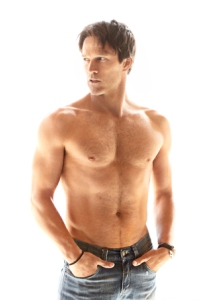 Moyer has found that persistence also pays off at work — just check out this shirtless outtake, shot for Men’s Health by James White! As one of Bon Temps’ resident vamps, the 41-year-old actor has to keep himself lean and mean, but pumping iron is not this Brit’s cup of tea — or should we say, stout?

“I’m an English boy. I played a lot of sports growing up, but I never had any kind of workout regimen,” Moyer tells Men’s Health. “My working out was with my right arm and it involved a pint glass.”

Like the missus, Moyer loves to box and get physical. It’s the crunches, cardio, circuit training and general grind that get him down. Luckily, the land of LA is rife with trainers, ready to whip anyone into shape.

“I find that I don’t go at it if I don’t have someone making me,” Moyer admits. “You’d be amazed at how quickly I let it all go… I think half of what a trainer does is make you feel shame if you don’t show up.”

Case in point, during the interview, his trainer Scot Guthrie pointed out that his workout is geared towards moving the beer gut up to his chest. To be fair, he wasn’t likely referring to a legit beer gut, but Moyer has to keep that tummy taut to go up against a cast of True Blood hunks, with younger Ryan Kwanten (Jason Stackhouse) at the top of the fit list. “[Jason] walks into a room and takes his shirt off. That’s his normal entrance,” Moyer said. “Ryan has minus six-percent body fat.”

The Men’s Health feature outlines some of Moyer’s workout regimen and for those trying to get cut like the boys of True Blood, Moyer insists persistence is key, no matter how slow the going is.

“There’s no immediate payoff,” he told the mag. “Sometimes it feels like it’s taking forever to see results. It takes commitment and time, but when you start to see results — when you feel a bit leaner or you’re doing more reps — you start to think, ‘Wow, I can see a difference!’ And it’s palpable. I recommend it.”

With True Blood premiering this Sunday, Stephen Moyer graces the cover of the July-August issue of Men’s Health, hitting newsstands June 28. You can catch the preview on the Men’s Health website now.