Ashton Kutcher, Demi Moore and Mel Gibson are said to be among the guests for Prince Albert of Monaco’s upcoming wedding. 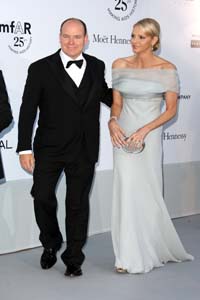 Europe is getting ready for another royal wedding — and this time, the guest list is pretty random.

Notorious playboy Prince Albert of Monaco is getting hitched to South African Olympian Charlene Wittstock on July 2 with plenty of Hollywood and political royalty in attendance.

Well, the normal world leaders and dignitaries will be there, including France’s President Nicolas Sarkozy and Carla Bruni, Prince Edward of Britain and wife Sophie (the Countess of Wessex), Crown Prince Felipe and Princess Letizia of Spain and King Carl Gustaf and Queen Silvia of Sweden.

Oh, and Ashton Kutcher, Demi Moore and Mel Gibson will be there too! Random? You bet. Designer Karl Lagerfeld, models Karolina Kurkova and Naomi Campbell and Sir Roger Moore are invited too, but somehow those make more sense than Moore and Kutcher.

What else is in store for Monaco’s royal wedding? Wittstock will wear a dress by Giorgio Armani and it’ll be an all-around glitzy and expensive affair.

Plus, the couple wants children, so we can expect to hear about more royal babies coming in the future (though we hope Prince William and Kate Middleton have a child first!).

Do you care about Monaco’s royal wedding?