James Blunt is now the pariah of Facebook after posting a photo that showed him near a notorious Polish landmark. 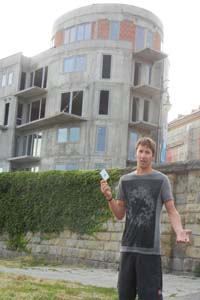 It looks like British singer James Blunt is now going to be known for two things — his annoying song You’re Beautiful and a stupid photo he took in Poland.

Blunt, 37, posted a photo to his Facebook page showing him with his hotel card in front of an abandoned building with the caption: “Err… this is my hotel in Poland.”

The problem? The building is very near to Auschwitz, the notorious Nazi concentration camp where millions of Jewish people were murdered during World War II. Yeah, not very smart.

Blunt was actually staying at a five-star hotel down the road while in town to perform at the Life Festival.

Naturally, people took offense and posted their disdain on his Facebook page.

“Who the [expletive] do you think you are?” one upset fan wrote.

Blunt’s insensitive post is surprising, especially since he served in Kosovo for the British army. He’s seen the horrors of war, so it makes his insensitivity all the more perplexing.

Blunt hasn’t said anything about the photo — and it’s currently still posted on his social networking profile with nearly 6,100 comments so far.

Will it stay up? Time will tell, especially with some of the comments.

“There are plenty of people in Africa dying of starvation and you’re complaining about a hotel which isn’t amazing,” another fan wrote. “You’re not even talented.”

Ouch. He kinda deserves it, though.

Was James Blunt wrong or are people just too sensitive?