Ex-Dior designer John Galliano is facing a judge today on hate speech charges — and his defense is he was wasted.

Related story The John Galliano verdict is in and he is… 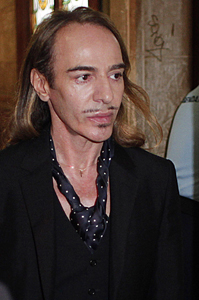 The fashion world was shaken to its core this winter when John Galliano was accused of hurling anti-Semitic insults at a couple in a Paris bar — and the incident was caught on video.

Since hate speech is a criminal offense in France, Galliano is facing a judge in the 17th Chamber of the Paris Correctional Court today, where he is expected to mount a strategic defense: Namely, that he is an alcoholic pill popper who didn’t know what he was saying.

“He had a triple addiction to alcohol, benzodiazepine (Valium) and sleeping pills… The combined effect of these drugs is a state of complete and utter abandon,” said Galliano’s lawyer Aurelien Hamelle.

“When he was in that state he had no way of knowing or remembering what he said.”

Galliano failed a sobriety test taken by cops immediately after the incident and later checked himself into rehab.

The prosecution intends to call multiple witnesses to testify that Galliano has a history of bigotry, including an old video of him saying “I love Hitler” and telling two women their parents should have been “gassed” by the Nazis.

The famed designer was fired by Dior after the most recent video surfaced. He faces six months in jail and $33,000 in fines if convicted on the charge of “casting public insults based on the origin, religious affiliation, race or ethnicity.”