Confirmed bachelor George Clooney has broken up with his girlfriend of two years, Elisabetta Canalis. 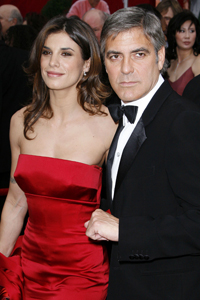 Ladies: Go get your hair done, get a mani-pedi, hit that Zumba class and throw on your cutest dress. The day you have been waiting for — for the past two years — has finally come. George Clooney is single again!

The dashing bachelor has broken up with his ridiculously gorgeous girlfriend and knowing the actor, he won’t be lonely for long, so you’d better move fast. A source tells SheKnows that George and Elisabetta split: “It’s true. He’s single.”

George Clooney and Elisabetta Canalis issued a short-but-sweet joint statement on the breakup, saying, “We are not together anymore.”

“It’s very difficult and very personal and we hope everyone can respect our privacy.”

What brought this on, other than Clooney’s usual relationship expiration date? Could it have something to do with that interview Elisabetta gave saying that Clooney did want to get married and have kids, making it sound like a wedding was imminent? Absolutely the worst thing you could do to a commitment-phobe like Clooney. Or it could be that she got him mixed up in the Italian PM’s prostitution case.

Canalis is nursing her broken heart on an all-girls trip to Mexico.