Sad Keanu is sad no more! Keanu Reeves has written his first book, the appropriately titled Ode to Happiness. 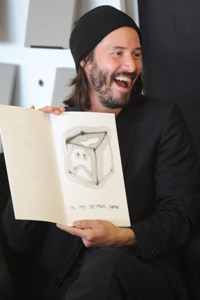 Rather than fight the ‘sad Keanu’ image the media has given him, Keanu Reeves is embracing it full tilt. The actor describes his first book, Ode to Happiness, as a “grown up children’s book.”

Inside the pages of Keanu Reeves’ book are lines of poetry written by the 46-year-old, complimented by images from artist Alexandra Grant. In the photo here Keanu is seen at a London book signing, giggling over a page in a set that reads, “I draw a hot sorrow bath/In my despair room.”

The lines go on to mention his “regret shampoo,” “pain soap,” “I hate myself face cream” and “alone again silk pajamas.”

Keanu Reeves’ ‘sad Keanu’ image started nearly a decade ago when a baby girl he was expecting with his girlfriend was stillborn. A few years later, the girlfriend was killed in a car crash. Attempts from fans to cheer Keanu up have included launching a Facebook page dedicated to the mission.

So how did Keanu Reeves’ book Ode to Happiness come to be? The illustrator explains, “Our friend [the book’s editor Janey Bergam] sat at Keanu’s house one night listening to wonderfully sad self-pitying songs and Keanu, in the spirit of poking fun at them, began to write a poem.”

After drawings were added to the poem, Keanu says, “I thought it was fantastic. Holding it I just had this moment of looking at it and going, ‘Wow, if I’d like to have this, then other people would like to have this,’ so we tried to make it a work as a book.”

Keanu does want to make sure people get that Ode to Happiness is not to be taken seriously. “It’s only personal in the sense of looking out and regarding my sense of humor,” he says. “I don’t usually take baths in my despair room with a misery candle burning.”

The silk pajamas and face cream, however, are totally true.

Will you be picking up Ode to Happiness, the book by ‘sad’ Keanu Reeves?