Bruce Springsteen gave his friend Clarence Clemons a touching goodbye at a private memorial service for the Big Man.

Springsteen and Clarence met in 1971 — a night immortalized in the song Tenth Avenue Freeze-Out — and the saxophonist joined the E Street Band shortly thereafter. 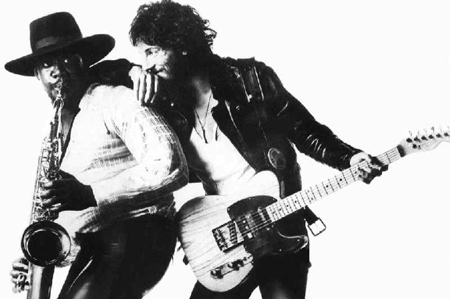 Clemons died Saturday at 69 years old. He suffered a stroke a week earlier.

Bruce Springsteen and the E Street Band, along with Jackson Browne, played an upbeat rendition of Clemons’ hit song You’re a Friend of Mine, and Springsteen played a mournful solo version of Tenth Avenue Freeze-Out.

“Clarence was a man of unconditional love, but his love came with a lot of conditions,” he said, eliciting laughter and agreement from those gathered. “He was a complex guy… an ongoing project. But when you were in his presence, it was like being in a sovereign nation.”

One of those complex conditions was a promise he elicited from his fifth wife before his death: That she would scatter his ashes at a special spot in Hawaii with “all of the special women in his life” — including his four ex-wives.