After days of speculation, Paris Hilton has confirmed that she and boyfriend Cy Waits have indeed broken up. 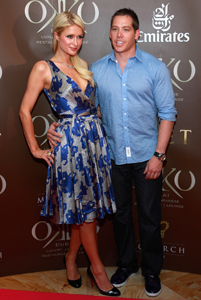 Break out the bubbly and Valtrex: Paris Hilton is officially single and ready to mingle!

SheKnows exclusively reported the details of the Paris Hilton and Cy Waits breakup yesterday — and now Paris has confirmed the split herself.

She broke the news during an appearance on Lopez Tonight.

“We’re not together anymore. I love him and we remain really good friends,” Hilton said to George Lopez on Lopez Tonight, adding, “I feel like the relationship ran its course and we’ll see what happens.”

Paris didn’t give any dirty details other than to refute Lopez’s suggestion that she likes to party and meet guys. Our sources told us that Cy got too clingy for the celebutante’s tastes.

Oh well, at least they’ll always have those matching mugshots to remember each other by.