Miss USA judge Penn Jillette says he is glad he helped Miss Tennessee USA lose her chance at the tiara — because he disagrees with her political beliefs. 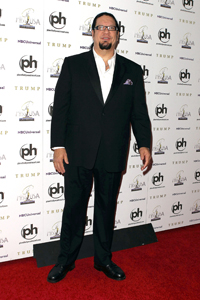 Illusionist Penn Jillette of Penn and Teller is a vocal proponent of our freedom of speech — but he doesn’t approve of a Miss USA contestant exercising her own freedom of speech to talk about her feelings on the First Amendment.

During the pageant, Miss Tennessee USA Ashley Durham was asked whether burning the Koran should be afforded the same First Amendment protection as burning the American flag. Durham answered that such actions crossed the line and shouldn’t be allowed.

“I know that some people view it as a freedom of speech, however, burning the American flag is not patriotic at all,” Durham said. “No American citizen should do that, and you should also respect other religions. I’m a Christian and a faithful person. I would personally not appreciate someone burning the Bible, and that’s just a line you do not cross.”

Jillette went on Twitter to express his delight in helping her lose — because he disagrees with her answer.

“I ‘judged’ Miss USA. ‘Miss’ TN was asked about burning the Koran and she negated the whole First Amendment. [Expletive] her. Glad to help her lose.”

“If they don’t want them judged on the questions, don’t ask them. And she didn’t answer well. It wasn’t just the idea.”

“She said people should not be allowed to burn books or the flag. I think that’s freedom of speech.”

“Well, she answered the question sloppily AND I think the Bill of Rights matters. Freedom is important,” he wrote.

Durham fired back at Jillette in a real, non-Twitter statement issued through pageant officials, saying it is uncalled for that he would delight in shooting down her dreams.

“I understand and am grateful for the protections we enjoy under the U.S. Constitution, but the First Amendment does not extend to all types of speech,” Durham said. “Due to my strong Christian beliefs, and my respect for the convictions of other, I personally feel that burning sacred texts goes too far.”