Matt Damon tackles a role unlike any other he has inhabited in his career in The Adjustment Bureau and we’ve got an exclusive clip!

In The Adjustment Bureau, Matt Damon portrays a rising politician with the brightest of futures. As he meets the woman he thinks may be “the one,” he is thrown into a thriller of a conspiracy that is as equally mind-blowing as it is, believe it or not, romantic. 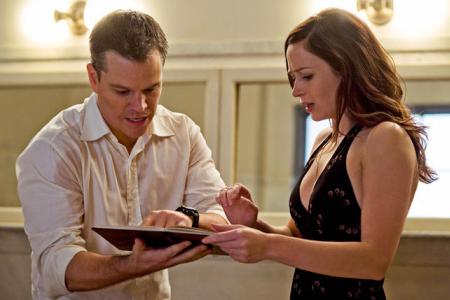 When The Adjustment Bureau hit theaters, it was promoted as a psychological thriller. In many ways, the film is really a romance about two characters destined to be together who are torn apart by forces beyond their control.

In our exclusive clip, Damon and co-star Emily Blunt meet for the first time. The scene, entitled David Meets Elise, illustrates the priceless chemistry between the Oscar winner and the UK starlet.

The romantic thriller (yes, that’s what we want to call it!) is completely unconventional. Damon’s character catches a glimpse of what fate has in store for him and decides to fight for another future. Enter the Adjustment Bureau, a group who’s charged with the task of keeping fate’s rules intact. Damon’s politico is risking his pre-determined political greatness for the hope of true love.