Bollywood superstar Aishwarya Rai has announced she’s pregnant. The baby is bound to be one of the world’s most beautiful. 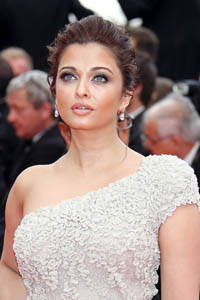 The Pink Panther 2 actress and Bollywood star Aishwarya Rai Bachchan is expecting her first child with her husband, but who let the happy news slip? It turns out it was the mother-to-be’s father-in-law, who tweeted excitedly, “T 410 — NEWS NEWS NEWS!! I AM GOING TO BECOME A GRANDFATHER… AISHWARYA EXPECTING… SO HAPPY AND THRILLED!!!”

Rai, 37, who is routinely referred to in the media as the “most beautiful woman in the world,” is married to Bollywood actor and producer Abhishek Bachchan, 35, whose father, Amitabh Bachchan, also a Bollywood actor, let the cat out of the bag. The couple married in 2007, and this is their first child together.

Aishwarya started her career as a fashion model, but she became an international beauty queen when she won the Miss World Pageant in 1994. Since then, she has appeared in dozens of Bollywood movies and played the part of Sonia Solandres in The Pink Panther 2 opposite Steve Martin.

The actress was photographed last month looking glamorous at the Cannes Film Festival, where she walked the red carpet for Sleeping Beauty in an unusual Armani Prive dress with a unique panel over the place where, one can see in hindsight, a baby bump may have been hiding.