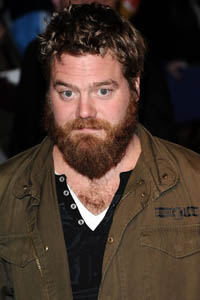 An early report from the autopsy of Jackass‘ Ryan Dunn states that the TV daredevil died from a combination of factors in the car accident that took his life yesterday morning in West Goshen, Pennsylvania. Blunt force trauma caused by the impact of the crash and thermal trauma from the car fire that ensued killed the 34-year-old reality TV star.

The role alcohol may have played in the incident won’t be known for four to six weeks, when the results of the toxicology tests will be released by the Chester County coroner’s office. Dunn was killed after leaving a pub in West Chester when his Porsche flew over a guardrail, crashed in a wooded area, and caught fire. Several hours prior to the accident, Dunn had posted photos of himself drinking with friends. Witnesses reported seeing Dunn drinking at the bar, but there are conflicting reports as to whether or not he appeared to be intoxicated.

Film critic Roger Ebert caused a furor when, on the day of the incident, he tweeted of Dunn’s death: “Friends don’t let jackasses drink and drive.” Ebert subsequently apologized for the ill-timed statement, noting, “I have no way of knowing if Ryan Dunn was drunk at the time of his death.”

A preliminary examination of the crash scene indicates Dunn may have been driving in excess of 100 mph in a 50-mph zone when he went off the road. The only other passenger in the car, Iraq war veteran and Jackass production assistant Zachary Hartwell, 30, was also killed in the wreck.