In her new book, Bristol Palin sets her sights on another person she doesn’t like: Meghan McCain. 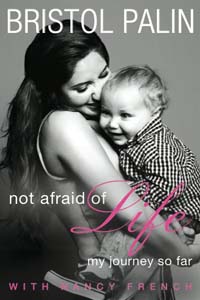 First it was ex-boyfriend and baby daddy Levi Johnston. Now, Bristol Palin is setting her sights on another outspoken political child: Meghan McCain.

The daughter of ex-Alaska governor Sarah Palin wrote in her new book, Not Afraid of Life: My Journey So Far, that she’s not exactly BFFs with McCain.

Palin wrote that she “had a sneaking suspicion I might need to watch my back.”

“Every time we saw Meghan, she seemed to be constantly checking us out, comparing my family to hers and complaining.”

McCain also reportedly “ignored us during the entire visit” when they met for the first time.

We get it — McCain is the type of girl who isn’t afraid to let you know that she doesn’t like you. The blond Daily Beast writer even went on The Daily Show and blasted the Dancing With the Stars reality star, telling host Jon Stewart that her father’s campaign had to hire an “image consultant” for talking “bad,” looking “like a stripper” and “hurting the campaign.”

Actually, it’s nice to hear Palin sticking up for herself — plenty of people blast her family, so it’s only natural that she’d speak up eventually.

Whose side are you on: Team Bristol Palin or Team Meghan McCain?

Read on for more Bristol Palin