Tracy Morgan traveled to Nashville to apologize for the homophobic remarks he made there during a comedy routine. 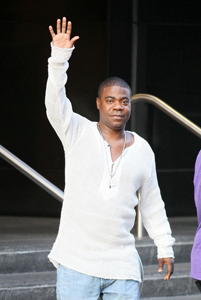 Although Tracy Morgan already issued a formal apology for his homophobic tirade earlier this month, the 30 Rock actor returned to Nashville to tell that night’s audience members and gay advocacy groups exactly how sorry he is.

Morgan met privately with the groups — including Kevin Rogers, the man whose Facebook post broke the story — then followed up with a press conference at the Nashville Convention Center.

“First thing I want to say is I apologize to Kevin and to people who were at the show for bumming them out,” Morgan said. “I want to apologize to my friends, and my family and my fans. I didn’t know, I didn’t mean it. I don’t have a hateful bone in my body. I don’t believe that anyone should be bullied or just made to feel bad about who they are… I really don’t care who you love, same sex or not, as long as you have the ability to love.”

“I don’t see gay or straight, I just see human beings,” he said.

“From the bottom of my heart, I apologize.”

A contrite Tracy Morgan says he now hopes he can make a difference in the way society views homosexual relationships.

read on for more tracy morgan