So much for that reconciliation. Ashlee Simpson has been stepping out with a new man, and Pete Wentz is nowhere in sight. 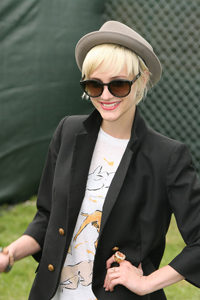 Despite those cozy family photos showing Ashlee Simpson and Pete Wentz looking like they might be on the road to reconciliation, it appears that the divorce is on. Ashlee made that perfectly clear by stepping out with a new man — and making out with him for the cameras.

Ashlee was romancing actor Vincent Piazza in New York City yesterday, where the new couple was spotted walking arm in arm and smooching on a park bench.

Piazza stars as Lucky Luciano in the award-winning TV series Boardwalk Empire. He also had roles in Rescue Me and The Sopranos.

Ashlee Simpson and Pete Wentz announced their split in February after two years of marriage, amid rumors that Pete is a workaholic who was never home and Ashlee was partying with other dudes. The couple has a two-year-old son, Bronx.

So what’s the deal with Ashlee and Vincent? We’re awaiting confirmation from her rep, but so far everyone is remaining tight-lipped on the budding romance. In the meantime, she has her new fashion line with big sister Jessica Simpson to keep her busy.