Ryan O’Neal made some shocking confessions during his appearance on Piers Morgan Live — including his belief that he and his family may have caused Farrah Fawcett’s cancer. 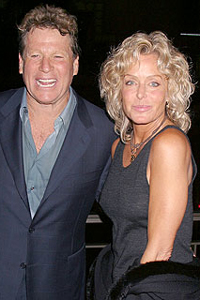 If Ryan O’Neal is trying to get some publicity for his new show on the OWN network, Ryan and Tatum: The O’Neals, it is working. The actor made an appearance on Piers Morgan Live on Monday night and talked about the death of his longtime girlfriend, Farrah Fawcett.

Fawcett lost her battle with cancer in 2009, and documented her long and painful struggle with the disease in her documentary, Farrah’s Story.

O’Neal talked to Piers about Farrah — and blamed himself and his estranged daughter, Tatum O’Neal, for her cancer.

“What bothers me the most is that there was turmoil during my love affair with Farrah, a lot of it caused by my family and my kids,” O’Neal said. “All of them, but particularly Tatum. And I just think that if she had never met us, would she still be alive today? Because nobody knows what causes cancer.”

“Do you really believe that?” asked Piers.

“Maybe it isn’t true, but it’s highly possible,” O’Neal said. “I wasn’t able to straighten out the mess we were in. And I sucked her in.”

When Piers said that was a “harsh” thing to say to Tatum, O’Neal said, “Sorry, Tatum, but you probably know, too.”