Jennifer Lopez showed off more than her dance moves while filming a German TV show. Find out what caused her nip slip wardrobe malfunction! 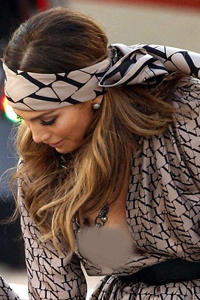 Khloe Kardashian has had one. So did Janet Jackson. Paris Hilton and Lindsay Lohan have practically made a career out of them.

We are talking about wardrobe malfunctions — and Jennifer Lopez is making headlines for her accidental nip slip while filming for a German TV show.

On Saturday, the American Idol judge arrived in Mallorca, Spain, to film an appearance on the German TV show, Wettan Das. She performed without any incidents wearing a black mini dress and stilettos.

Her second appearance on the show was a sit-down interview outside in a bullfighting arena. Lopez, 41, looked amazing in a long belted dress with a plunging neckline and matching head wrap.

As she was getting ready to sit down, a breeze caught her long, flowing skirt and she and the host of the show, Thomas Gottschalk, reached down to hold it down.

As she bent down, her blouse fell open causing a major nip slip — on live TV!

Being the true professional she is (or maybe she was unaware it happened until later), Lopez continued the interview.