Rocker Noel Gallagher got married to his longtime girlfriend and baby mama Sara MacDonald over the weekend — but his brother Liam Gallagher was nowhere to be found. 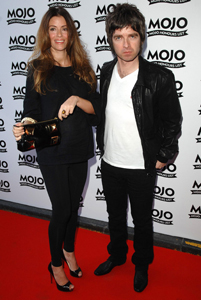 It’s a rock star wedding with a family feud twist: Noel Gallagher of Oasis got married this weekend but didn’t even invite his brother and band mate Liam Gallagher!

Noel and Liam have a notoriously explosive relationship and haven’t been on speaking terms since Noel walked out on the band in 2009.

Liam says he didn’t sit out the nuptials in protest: He simply wasn’t invited by his spiteful brother.

“I’m busy playing gigs in Chicago,” Liam told the Chicago Sun-Times. “He goes on about how he wasn’t invited to my wedding… Get over it, mate. I’ve not been invited to his wedding.”

Read on for more celebrity love, marriage and babies on SheKnows

There were plenty of other luminaries in attendance to make up for Liam’s absence. Musician Paul Weller, actor John Simm, Little Britain‘s David Williams and his supermodel wife Lara Stone — and Noel’s best man Russell Brand (Katy Perry was MIA).

The bride wore a vintage ivory gown and the ceremony included their two children, sons Donovan and Sonny, as well as Noel’s daughter Anais from a previous relationship.