Paris Hilton has split from boyfriend Cy Waits — and SheKnows has the exclusive details! 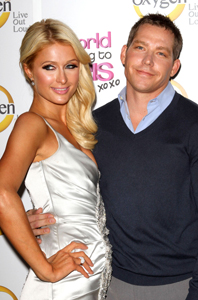 Paris Hilton and her boyfriend Cy Waits have broken up — and pals tell SheKnows exclusively that she dumped him!

Despite reports that their split was “amicable,” a source tells SheKnows that Paris was most certainly calling the shots in this breakup.

“She dumped him,” says our source. “He was just way too clingy. He was always calling her and she felt totally smothered.”

And it’s no surprise — our source adds that Paris is already back on the prowl.

Other pals say club manager Waits got tired of constantly living in the spotlight.

The couple had a rather dramatic courtship: Cy was with Paris when she was arrested for cocaine possession in Las Vegas last summer, he saved her from an attempted home invasion a few months ago and took one for the team when a crazed fan threw water in his face and grabbed him by the neck before Paris’ bodyguards could intervene. Waits was also featured heavily on The World According to Paris, but was noticeably absent when Paris attended Justin Bieber’s manager’s birthday party.

Do you think Paris gets to keep the $375,000 Lexus LFA Cy gave her for her birthday?