Ashley Hebert’s heart was broken when Bentley Williams chose to walk away on The Bachelorette and this week she revisited the pain all over again.

Not even the beautiful location of Chiang Mai, Thailand could keep Ashley Hebert’s mind off of Bentley Williams this week on The Bachelorette. Oh, who are we kidding? It’s not even about this week — she’s been pining over him since he left in episode three. 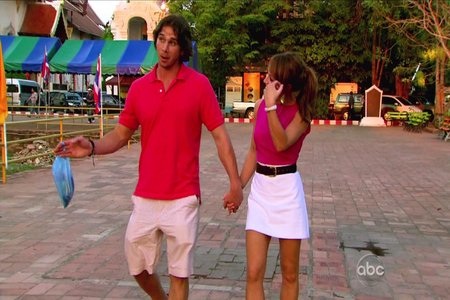 Before we get to the fact that Bentley didn’t show his face this week, here’s how the dates went down. The typical group date was in play but the individual dates were switched a bit. There was one guy chosen to go on an individual date then there was a two-on-one date. Whoever got the rose during that date moved on (but still could be eliminated). Whoever didn’t get the rose had to immediately leave Thailand.

Despite Ashley’s insistence she was ready to fall in love this week, we knew Bentley Williams was in the back of her mind. We went along with the farce as she first went on an individual date with Ben F. These two really got close last week and the more they cuddle, the more we root for them! They enjoyed the streets of Chiang Mai as they took in the food, music and magnificent culture. No smooching in front of the temple for these two — it’s not allowed. They totally “mental kissed.”

They could barely keep their hands off each other going into their evening meal. Ben shared the loss of his father with Ashley and how it’s closed him off. They warmed up over some fire-eaters and finally got the passionate kiss they wanted. He secured a rose.

The group date between Ashley, Ames, Nick, Blake, Lucas, Ryan, J.P., Mickey and Constantine involved beating each other down with Muay Thai boxing! 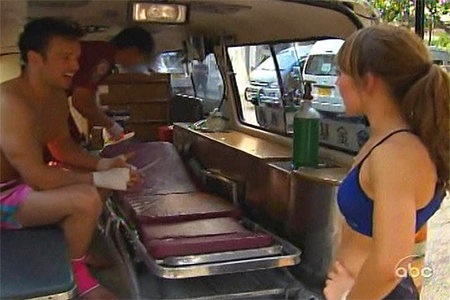 Ames was too polite to go up against Ryan. He tried to let out his inner warrior but Ryan wailed on him to a point where we thought it should have been stopped. The poor guy was taken off site to the medic!

During the evening cocktail party, spirits were down as everyone worried about the fate of Ames.

Have no fear, the resilient Ames made it to the party. Taking a hit to the head in the ring worked out brilliantly for him. Ashley gave him some one-on-one time but his thoughts were jumbled as he had a mild concussion. She gave him lots of hugs and TLC.

Despite being turned on by Lucas’ golf lesson and Ryan’s smooth talking, Ashley handed Blake a rose due to their slow romance.

No one wants to be a third wheel on a date. So, who was the third wheel on the date between Ben C., William and Ashley? Well, let’s just say at the beginning, William rowed a raft while Ben C. got to mack on Ashley. The tide changed for William, though. He grabbed some time with Ashley and slammed Ben C. right to Ashley’s face. He told Ashley that Ben C. did not have her on his mind.

Was it a good move to slam another guy? Well, she did send Ben C. packing immediately but she also sent William home, too! Why? Ashley said she would never again feel that feeling she had on their first date.

The Rose ceremony and bentley williams

Ashley entered the rose ceremony bent on figuring out who was there for her and who was not. It all led back to her need to see Bentley just one more time.

So, did he make his return? Ashley cried to Chris Harrison that she had to figure out her feelings for Bentley otherwise she couldn’t fall in love properly.

Harrison still made her go on with the rose ceremony but promised her he’d try to get her a resolution with Bentley. The guys that got a rose were Ben F., Blake, Constantine, Lucas, J.P., Ames, Mickey and Ryan, leaving Ben C., William and Nick to say goodbye.

After an hour of waiting for Bentley to return, as that’s what everyone thought was going to happen, he didn’t! The tease from last week was just her feelings. He actually shows up next week. What a bummer!

What did you think of this week’s episode of The Bachelorette?