Cameron Diaz dishes on the real story behind the video of her feeding boyfriend Alex Rodriguez popcorn. He tried to steal her food! 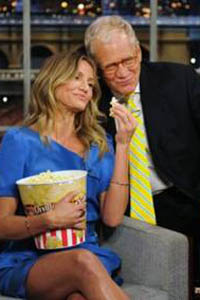 Cameron Diaz has finally revealed the true story of why she was feeding baseball player boyfriend Alex Rodriguez popcorn at this year’s Super Bowl. As she told David Letterman, it happened because A-Rod stuck his hand into Diaz’s popcorn bucket.

“You want to know the story, Dave?” Diaz asked Letterman after the Late Show host held up a photo of Diaz hand-feeding Rodriguez in their football sky box. “We were watching the game, and I was eating, and I was getting down to, like, the last couple pieces of popcorn, and all of a sudden, I see a hand coming in.”

Apparently, Diaz is picky about her food. Put your hand between her and her food? You just might lose it.

“And I’m like — anybody who knows me does not put their hand in my food, especially when it’s close to my mouth,” Diaz explained. “And I said, ‘What are you…?’ And then I went, ‘You know what? I love you too much, I’m going to give it to you. You deserve it.'”

Cameras at the game caught the food-feeding action, which was played on the stadium’s giant TV screen, leading to boos from the crowd, and a media frenzy ensued.

“And then, of course, they got it, and then, 10 minutes later, we’re blowing up on our Blackberries,” Diaz revealed. “We’re like, ‘What? What?’ And we started laughing so hard, like, ‘Are you kidding me? Are you kidding me?'”

Thankfully, A-Rod left the incident with both hands intact.