Glee creator Ryan Murphy knows when it’s time to move on and when it comes to the cast of Glee, he isn’t going to let his hit show hold on to an aging cast forever. He plans to let the kids graduate with dignity and move on after season three.

Ryan Murphy recently called in to Ryan Seacrest’s morning show to dish all things Glee and his recent engagement. 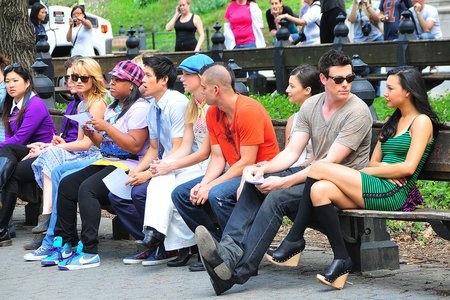 One of the topics that came up was the pending graduation of the cast. The fans aren’t blind and they know their beloved McKinley High kids started the show as sophomores, which puts them as graduating seniors when season three hits. Ryan Murphy confirmed he won’t be one of those people who tries to force an aging cast to stay in high school forever.

“I don’t think of it in terms of eliminating or replacing,” he told Ryan Seacrest. “Because I think the thing about this cast is people love them and they are incredibly talented. They’ve left sort of an indelible mark. The thing that I wanted to do and the cast wanted to do, we didn’t want to have a show where they were in high school for eight years. We really wanted it to be true to that experience. We thought it would be really cool if we were true to the timeline.”

Just because the kids will eventually move on doesn’t mean everyone will be saying goodbye.

“We’ve got Matt Morrison and Jane Lynch who will stay and be the male and female lynchpins of the series. But I think the fun thing about the show is it’s a celebration of youth and talent and I think that just like with the original cast, I think finding those young unknown people and giving them an opportunity to break into the business and become stars is a really fun and exciting thing and is the spirit of the series.”

Ryan Murphy is currently seeking new Glee blood on The Glee Project, which airs on Oxygen. His goal is to find a new face to star in a seven-episode arc.

Ryan Murphy is the master of making great television, so his decision to usher the successful cast out and bring a new one in will no doubt work in the show’s favor. Everyone always complains about the unrealistic aspect of high school shows, now he’s giving us something we can invest in — fresh stories, driven by a realistic character timeline.